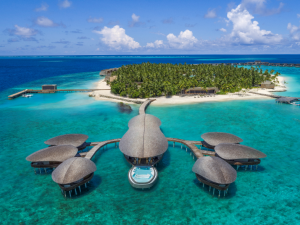 The World Spa Awards 2018 has been unwrapped for voting and the Maldives has been nominated as ‘Indian Ocean’s Best Spa Destination’. The World Spa Awards was launched in 2015 and is the sister event of World Travel Awards, renowned as being the ‘Oscars of the Industry’.

The winners will be announced at the 2018 World Spa Awards, which are to be held at The St. Regis Maldives Vommuli Resort on 26th October 2018.

Vote for the Maldives as the World’s Best Spa Destination at this year’s 4th Annual Spa Awards by visiting the following link on World Spa Awards website: www.worldspaawards.com/vote/maldives-2018. Voting will be open until 17th August 2018.

For further information on the Maldives, visit www.visitmaldives.com.

See challenges as opportunities
Shout about your achievements and build the network ! Great advice from our #IWTTF panellists this morning

What has been the biggest challenge for you, Zina, in your career? “I love a challenge, and the ability to show someone they were wrong, and I am capable of the job” What a great question from the audience! #iwttf #womenintravel @PEAKDMC @ZBencheikh

Eliza Reid, Iceland’s First Lady speaks @WTMWomen #internationalforum and shares that diversity-leading #Iceland is proven to be healthier and happier than many less equal nations - but still more Iceland wishes to do in terms of championing #diversity ... #iwttf #womenintravel

Oddny from @iceland remarks that the weather has shaped women in this country...if the last day or two is anything to go by, we salute you #icelandic #women!

Iceland we made it! Off to Reykjavík via flybus thanks to our travel partner Reykjavík Excursions! We are so excited to be here, and are pumped for #IWTTF to officially kick off! Thank you @rvkexcursions! @GECPRUK #womenintravel

Follow In Pep Guardiola’s ‘Golfing Shoes’ And Swing By The Maldives For Putting In Paradise
January 9, 2020 / gecpr

LOVE Is in the Air in Philadelphia This Valentine’s Day
January 6, 2020 / gecpr