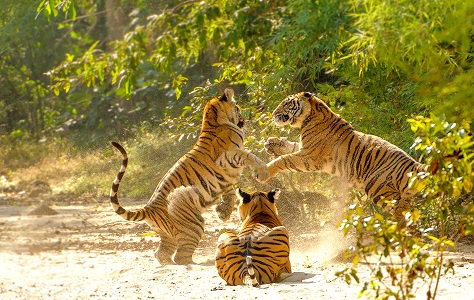 To arrange a meeting or interview with Madhya Pradesh Tourism at WTM,
please email Fiona and the team at mpt@gecpr.co.uk

Madhya Pradesh Tourism will showcase the state’s rich wildlife offering to UK and international travellers during World Travel Market from 4-6 November 2019. This year, Madhya Pradesh’s Tourism Minister, Shri Surendra Singh Baghel, will be attending the London event. Mr Baghel not only champions eco-tourism initiatives, he is also dedicated to female and Tribal empowerment and quality health, education and sports facilities.Madhya Pradesh Tourism will also offer one lucky travel agent the chance to win a FAM trip to Madhya Pradesh, India’s ‘Tiger State’ and one of Lonely Planet’s ‘best value’ destinations for 2020, at this year’s World Travel Market. To stand a chance of winning, agents should book in a meeting with the tourist board and answer a question about the state in order to enter a business card prize draw. Meetings can be booked by emailing mpt@gecpr.co.uk. Alternatively, travel agents can pose for a photograph with a tiger or Mowgli on the stand (AS530) and share online with the tags #MPTourism and @MPTourism on Instagram, Facebook, or Twitter.

Madhya Pradesh is the second largest state in India and is best placed to bring humans into close contact with some of the world’s most wonderous wildlife. Recently, Madhya Pradesh Tourism Board has successfully launched Runcation Mobile App on Android and iOS platforms which will provide information to tourists about the various destinations in Madhya Pradesh, as well as helping them discover facts about the state and book accommodation. Tourists can also explore destinations on the app through 3600 photos and quizzes.

The state in the heart of Incredible India, is most famous for its six tiger reserves. Thanks to its 10,000 sq km of national parks, Madhya Pradesh accounts for almost a fifth of India’s tiger population and is consequently known as the ‘Tiger State’. Sir David Attenborough’s recent BBC wildlife documentary series Dynasties included an episode filmed in Madhya Pradesh’s Bandhavgarh Tiger Reserve. And the Tiger State of India is now set to get its seventh tiger reserve – Ratapani.

Madhya Pradesh has been shortlisted in two prestigious categories at the International Travel and Tourism Awards, which will take place at World Travel Market. The state has been nominated for ‘Best Destination Campaign – Region’ due to its vibrancy, culture and individuality which was displayed through its ‘Memories of a Destination’ TVC. It is also shortlisted for the ‘Best Food Destination’ award which recognised how Madhya Pradesh’s ‘Indore – The City of Foodies Campaign’ showcased the major role of the state’s gastronomy to the experience of its tourists.